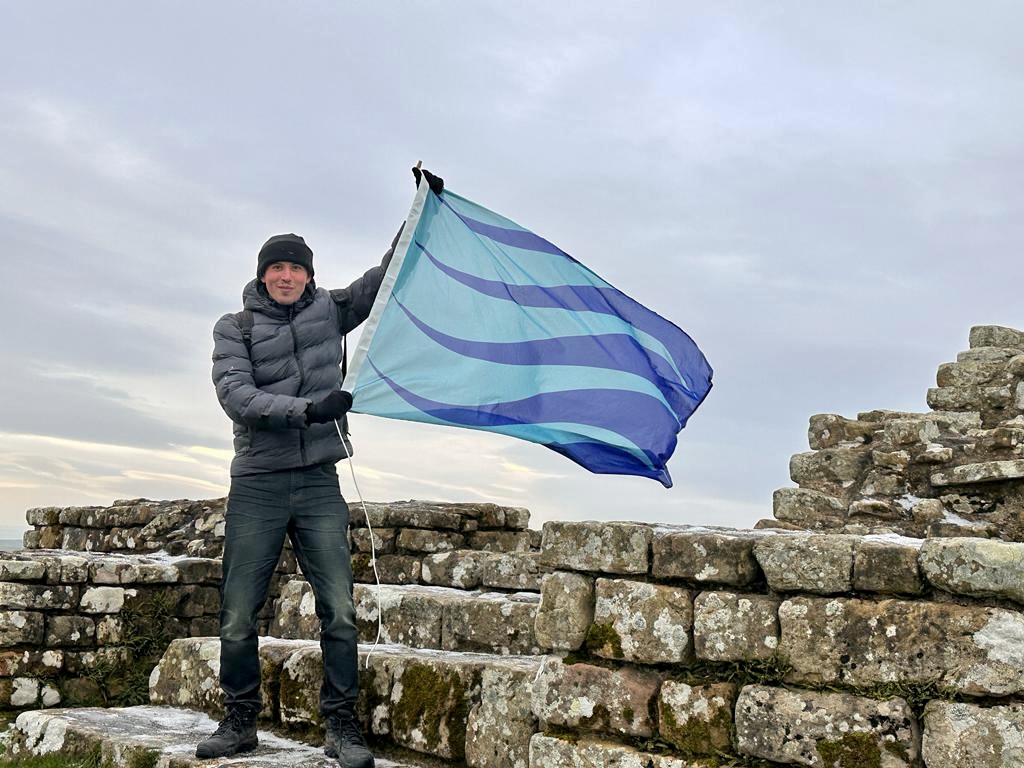 A team of people who stammer from various countries have created a stammering pride flag. Conor Foran, graphic designer of Irish Stammering Association, led the creative endeavour. Conor is an Irish person who stammers and a creative practitioner living in London. He believes art and design have the power to transform how we see ourselves as people who stammer; he hopes the flag will do just that.

The flag currently has a crowdfunding page, where you can donate money to get a flag. Postcards, stickers and flags will be printed and posted in the coming weeks.

The info below is taken from www.stutteringprideflag.org where you can learn more about the flag:

Why make a flag?

Flags have been crucial tools in political rights movements throughout history. A flag can be a powerful, galvanising symbol for a group, but also something with inherent meaning that is unique to each individual. We came together as a group to make a flag that visually embodies the values, ideals and hopes of stuttering pride. We understand stuttering itself as a political act. With this flag, we take pride in our speech disability.

We hope people who stutter and their allies will be brought the same joy, inspiration and sense of solidarity as the flag has brought us: that the flag can bring us together as a community, as well as encourage each person on their own stuttering and life journeys too.

Water has long been associated with stuttering and speech. The Egyptian hieroglyph for stuttering features a wave-like motif. The iceberg analogy has been useful to people who stutter to understand their experience of stuttering and has recently been powerfully reframed by Nina G using the lens of stuttering pride.

As a group, we discussed Jordan Scott’s book I Talk Like a River that showed us how water can be used to illustrate the nuances in the stuttering experience. So too, JJJJJerome Ellis’ The Clearing that poetically relates stuttering to water and nature. We were eager to build upon this work by the stuttering community in a meaningful way, emphasising that stuttering is as natural as whirling waves and calm creeks.

Who is making this flag?

Conor Foran designed the flag following a collaborative process and conversation with the team supported by allies. Learn more about where the three values came from in the following video: https://www.youtube.com/watch?v=YketbpT9lt8

‍Community (sea-green)
Symbolising the existing community that has used this colour for stuttering awareness since 2009.

Liberation (ultramarine)
Symbolising the progress and passion of the stuttering pride movement.

We will hold these same values close when making decisions about the flag in the future. Endeavouring to both serve and bring together the stuttering community, be kind to nature and bring about the liberation of the stuttered voice.

Get a flag here: https://www.indiegogo.com/projects/stuttering-pride-flag--2